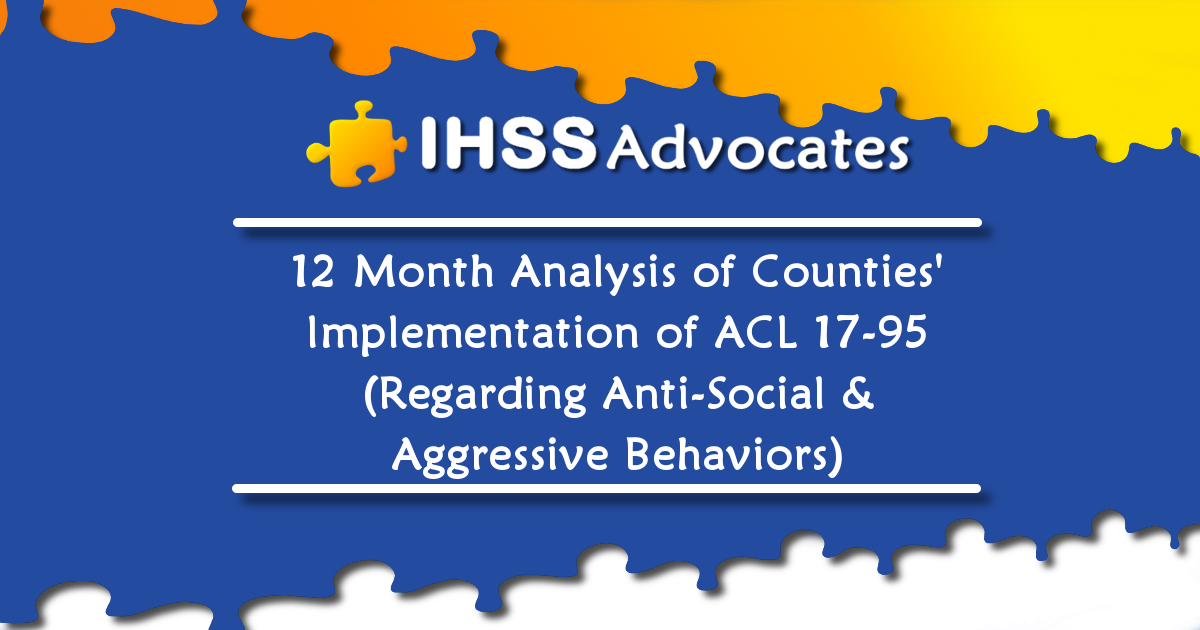 CDSS All County Letter (“ACL”) 17-95 was released by the State on 09/12/17 and was intended to clarify a number of areas, including the following.

With a focus on ACL 17-95 Anti-Social and Aggressive Behavior guidelines, this analysis encompasses, breaks down and summarizes this author’s/advocate’s direct observations of the IHSS review process within the last 12 months.

The following 3 paragraphs have been “cut and pasted” from pages 6 and 7 of ACL 17-95 and contain CDSS’ new policies in connection with the following.

*Note: Bold & italicized words below are the author’s.

Anti-Social and Aggressive Behaviors and PS-Eligibility

Assessing PS-eligibility, due to a recipient’s (minor or adult) combative behavior, shall be evaluated based upon the willfulness of that behavior. As with all services, the recipient’s age and specific behavior shall be considered.

Additionally, a recipient who displays intentional self-destructive behavior, with knowledge that the activity may cause self-harm, would not be PS-eligible. [MPP Section 30-757.172(e).] This type of behavior may include tantrums or head-banging as a way to achieve a desired result. In this case, the recipient would be considered self-directing, as there is knowledge that the activity may cause self-harm; therefore, he/she would be ineligible for PS.

As indicated above, and with respect to head-banging and tantruming, there are 2 components to denying an individual Protective Supervision:

In light of the fact that ACL 17-95 was implemented twelve (12) months ago, the author has had ample time to digest and analyze precisely how this policy is being carried out by both State and county officials.

First, the author has encountered the following seemingly automatic (and oddly consistent) interpretation among social workers, Appeal Representatives and ALJ’s:

And while this trend is now “the norm,” the author has yet to witness any serious examination or discussion of whether an individual is truly aware of potential self-harm (i.e., it seems that, “all you need is the excluded behavior”). Additionally, this (assumed) “link” between “awareness of potential self-harm” and attempts at “achieving a desired result” appears “somewhat dubious,” at best.

Additionally, within the last 12 months, one particular exchange inevitably occurs at virtually every IHSS in-home assessment and it goes something like the following:

Claimant: “Johnny tantrums and elopes and bites himself.”

Social Worker: “Really? Do you know why?

Claimant: “Sometimes I do, sometimes I don’t. Sometimes he wants food, or he wants a trip to Chuck E. Cheese or he doesn’t want to help clean-up.”

Social Worker: “A trigger!! Now we know why Johnny tantrums, runs off and bites himself!! Now we understand !! Johnny is self-directing!!!”

Clearly, determining whether an individual is non-self-directing has very little to do with the cause (or trigger) of the behavior and everything to do with an individual’s (reasonable or unreasonable) reaction to the trigger. When 7-year old Johnny cries after being told, “No, we’re not going to Chuck E. Cheese today,” this could be viewed as self-directed behavior. There is no engagement in potentially dangerous behavior(s). But when Johnny’s told “No Chuck E. Cheese today,” and he bangs his head, runs out the door or bites himself, then his actions are potentially non self-directed. If the county claims that Johnny’s head banging/tantruming (caused by “no Chuck E. Cheese visit”) is an example of self-directed behavior, the county must demonstrate that Johnny is aware that his head banging/tantruming is potentially dangerous.

It’s the behavior, NOT the trigger.

And just because a social worker (or parent) thinks they know the reason(s) for bad behavior, it doesn’t mean a child is self-directing (or, that a developmentally disabled child suddenly becomes aware of potential self-harm, commensurate with neurotypical cohorts). For some odd reason, the State and counties are focusing almost exclusively on triggers and not on the actual behaviors (or reactions) themselves. In other words, State and county officials appear to be “going backwards” by deeming individuals self-directing simply based on the identification of a trigger (or possible trigger). Similarly, it appears that IHSS is simply “skipping” the non-self directing piece to ACL 17-95’s anti-social/aggressive behavior policy.

If you need any assistance, you are welcome to join our support group at: IHSS Advocacy Group